Why I respect P.J. Hoover, author of Solstice – and a giveaway!

By Laura on August 3, 2011 in book reviews, publishing industry

I’m impressed with P.J. Hoover, author of Solstice. Scroll down to see how you can win a copy! 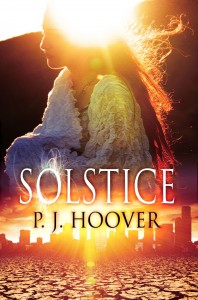 My respect for P.J. shot through the roof. #iknowcliche

And that’s what my short series on self promotion was all about. In order to promote your own books on your blog, without guilting your readers, you need to promote others.

So, I’m here to give a shout out to P.J. Hoover and her book, Solstice.

Where Mythology and Dystopia meet…

Piper’s world is dying. Global warming kills every living thing on Earth, and each day brings hotter temperatures and heat bubbles which threaten to destroy humanity. Amid this Global Heating Crisis, Piper lives with her mother who suffocates her more than the chaotic climate. When her mother is called away to meet the father Piper has been running from her entire life, Piper seizes an opportunity for freedom.

But when Piper discovers a world of mythology she never knew existed, she realizes her world is not the only one in crisis. While Gods battle for control of the Underworld, Piper’s life spirals into turmoil, and she struggles to find answers to secrets kept from her since birth. And though she’s drawn to her classmate Shayne, he may be more than he claims. Piper has to choose whom she can trust and how she can save the people she loves even if it means the end of everything she’s ever known.

SOLSTICE is available as a $2.99 ebook (paperbacks should be available in the next week or two) from:

What are you waiting for? Hit the retweet button or @laurapauling and leave a comment on this post! A winner will be chosen at random and P.J Hoover will send you an e-copy of Solstice! Please leave your email address. Contest will end on Monday, August 8th!

← Lessons from the U.S. women’s soccer team.
Yay! My turn to read MY VERY UNFAIRY TALE LIFE (and my first vlog). →

31 Responses to Why I respect P.J. Hoover, author of Solstice – and a giveaway!