Warning: scandir() [function.scandir]: (errno 2): No such file or directory in /home/content/82/6039282/html/_sites/laurapauling_com/wp-content/plugins/better-wp-security/core/modules/backup/class-itsec-backup.php on line 273
 Trapped! | Laura Pauling

Trapped.
Communication with the outside world impossible either because of a storm, cut lines, or they’re on an island.
Someone dies. Murdered.
A killer lurks. Who is it?
Each person has his or her own personality quirks or suspicions. Of course, they don’t all get along. In fact, one or two of them are down right insufferable. 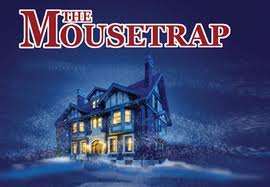 This is perfect for stories because the ticking bomb is built into the premise, along with the tension. But at the same time, character development is crucial.

This past week, I had the great pleasure of attending The Mousetrap based on Agatha Christie’s novel, at my local theater. I am very proud to say that I solved the murder before the killer was revealed. I just chose the person least likely to be it and the solution appeared. Though, I don’t think that would work with more modern stories. I think about Across the Universe by Beth Revis, and soon-to-be-released Ten by Gretchen McNeil.

I love attending my local theater especially since my daughter participated in the junior intern program all summer. Something about the theater is awe-inspiring. I love seeing how they build up to a reveal or an intense emotional moment or how they make something even more hilarious through hyperbole.

So much to learn.

Of course, as writers, we all know how studying movies helps us with our storytelling so watching theater helps too. But I loved spending time with my daughter too, who loves theater.

Seen any musicals or plays this summer? Which one is your favorite?

A Spy Like Me, Agatha Christie, author, blogging, Laura Pauling, self publishing, The Mousetrap, young adult

← Hope is like a giant carnivore.
Random Acts of Publicity – TIMELESS →