INDIE-giving – Thankful for the small things. (And a giveaway) 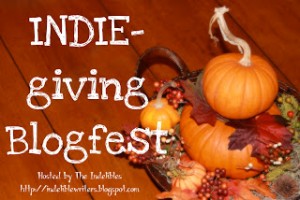 When we were first planning this INDIEgiving blogfest, I said to myself easy peasy – I can do this. I’m thankful for so much. But it was really hard to narrow down.

I’m thankful for the option to self publish, for readers, for the Indelibles and the wealth of knowledge within the group. I’m thankful for all my blogging friends, critique partners and beta readers.

But that feels so insignificant when compared to the fact that I have a friend with 3-6 months left to live. Yet, he and his family are finding ways to glorify God through this tough time.

But I’m especially thankful for the little things.

My son’s smile and the hug I get every day. My daughter’s teachers at school, who totally impressed me. My sister, who called yesterday.

The fact that my husband is pushing me completely out of my comfort zone with this huge Thanksgiving party. Gulp. **breathes into paper bag**

For the friends in my life who show me grace and still invest in my friendship even when I’m not the perfect friend.

But small things add up, and together, they bring a smile to my face every day.

And for the giveaway!

This is really simple. The sequel to A SPY LIKE ME will be out in the next couple weeks. Yay!

If you haven’t read A SPY LIKE ME yet, use my contact form or leave a note in the comments with your name, email, and preferred file (epub or mobi) and I’ll email it to you! 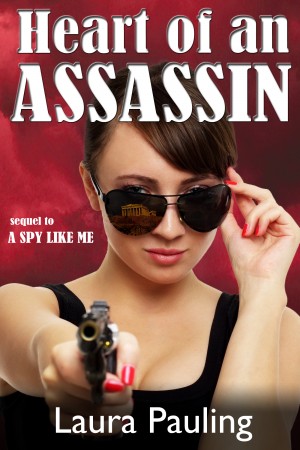 Make sure to visit everyone posting in the INDIE-giving blogfest. Click here for the links.

For all my friends in the States, have a wonderful Thanksgiving!

Walk among the dead with Stacy Green.

So excited to have one of my blogging buddies, Stacy Green, here to share her knowledge on the Parisian catacombs. She writes her Thriller Thursdays and finds the creepiest mysteries. And since my main character, Savvy, has her own adventures in this underground maze, I had to invite Stacy! And you know? She’s got a book deal for the fall!

An avid reader of suspense, paranormal, and true crime, Stacy’s first novel, INTO THE DARK, will be released from MuseItUp Publishing in November. When she’s not writing, she loves spending time with her precocious six-year-old daughter, her supportive husband, and the family’s three obnoxious dogs. For more true crime and paranormal posts, check out Stacy’s Thriller Thursday feature on her blog.

Some of you may know about the storm drains of Las Vegas–an underground labyrinth of dark, dank flood channels doubling as housing for the city’s homeless population. The infamous tunnels play an important role in my debut novel INTO THE DARK. While the Vegas drains are terrifying, there are no scarier–or more fascinating–tunnels than the Catacombs of Paris. Spanning more than 180 miles, the catacombs date back to the twelfth century and are literally filled with the dead.

18th Century Paris was at the heart of the enlightenment, but it was also filthy and overrun with disease. Imagine a bustling culture of the world’s greatest thinkers and artists walking amid garbage, open sewers, and overflowing cemeteries. One of the most affected areas was the Les Halles district, particularly the Saints Innocents Cemetery, known as Les Innocents (the same one Anne Rice used in The Vampire Lestat). Used for nearly ten centuries, improper burial techniques in Les Innocents led to contamination of Les Halles’s ground water and surrounding land.

Victims of the black plaque, epidemics, starvations, of all the wars since the Middle Ages rest in the city’s 200 cemeteries, piled up on several levels in the mass graves of the churches. Every day, new cadavers join the previous ones. Paris is flooded by the dead, the odor is unbearable. — The Paris Catacombs

Paris’s dead were pushing out the living, and officials made a bold decision. Paris is built over large gypsum and limestone quarries mined in the 12th century. Notre Dame and the Louvre are just two of the famous monuments built from the quarries. Over time, the quarries became unstable, and in 1770s, they were repaired to make room for the dead.

In an effort to stop the spread of disease, Paris’s overflowing cemeteries were cleared out and the bones interred within the quarries. Beginning in 1785, work was done under the cover of night and chanting priests accompanied the procession. The quarries house the bones from all the cemeteries of Paris up through the mid 1800s (although some accounts have the transfer stopping as early as 1814).

The catacombs have long been the stuff of legends. A tourist attraction since the 1860s, they were used as mini concert halls and later by members of the French Resistance during World War II. In the rebellious 1980s, young Parisians used the crypts as a place for parties, sneaking into the tunnels through various unmonitored entrances. Over the years, the Catacombs were fortified and areas were sanctioned off for tourists. Only a small part of the tunnels is open to the public, and the main entrances are now guarded, but the enterprising explorer can still sneak their way in via the sewers, metro, and manholes.

The underground labyrinth is complex and confusing. Imagine being deep underground, surrounded by centuries-old bones, with only the tiniest of lights to guide you. Even an accomplished navigator could lose his way, and there are countless stories about people getting lost in the catacombs. Some, like the explorer who claimed he was attacked and dragged off by some sort of monster, are likely the delusions of a man trapped in a terrifying underground dark maze full of bones.

But people have disappeared in the tunnels. Last July, three people were part of a group partying in the crypts. They became separated from their friends and instead of finding their way out wound up going deeper into the maze. They spent two days lost in the dark before they were found and fined for trespassing.

National Geographic writer Neil Shea spent time researching the tunnels with the cataphiles, the people who love to roam the underground world. Shea described the cataphiles as “a loose and leaderless community whose members sometimes spend days and nights below the city.” One cataphile told Shea he came down to the crypts for the freedom. “No boss, no master. Many people come down here to party, some people to paint. Some people to destroy or to create or to explore. We do what we want here. We don’t have rules.”

Could you be a cataphile, spending hours among centuries worth of bones, with your only light source a candle or flashlight? Would you emerge from the Catacombs feeling empowered and alive, or shaken and traumatized like so many others who’ve been lost below?

For more information on the Paris Catacombs, including booking a tour and some excellent pictures, visit Why Go Paris.

Don’t forget to check out the giveaways this week!

What’s the creepiest place you’ve been?

What does the Creepy Query Girl and A Spy Like Me have in common?

Today we have a treat. Katie (A.K.A. Creepy Query Girl) is talking about living in France. I’ve followed her blog for a couple years and keep reading for her honesty, humor, and well, because she’s Katie! Visit her blog and see why she’s loved by the blogosphere. I’ve read snippets of her work and think she’s a talented writer. Watch out world! Take it away, Katie!

Oh, and Katie lives in France and A Spy Like Me is set in Paris, France!

So, when Laura proposed I write about being an American living in France, I realized that most of the posts I’ve already written complained about French drivers, or ‘goodbye’ protocol, the French’s obsessions with eating outside or ironing every piece of clothing they own.

But the bottom line is, I choose to live in France because there are way more things I love than things that irk me. So today I’m going to tell you about those things:

Eating in France is awesome. Any trip to the grocery store can result in cheap-but-delicious wine, cheese, pastries, pâtés, smoked meats, or chocolate. The food here is that good.

Staying skinny in France is pretty awesome, too. Despite the calories in all of the above, the strict eating schedule most French adhere to (early breakfast, two-hour lunches where everything closes from 12:30-2:30pm, snack at 4pm and hour-long dinner at night ‘en famille’) gives us an advantage in digestion and food choices that works to maintain average body weight.

Free Health Care in France. Basically, French citizens have a social security card with a chip in it. We pay for our medical appointments up front (between 25-50 euros) and then we’re reimbursed electronically within the week/month. Same goes for procedures like ultrasounds or x-rays. Things are usually covered immediately for prescriptions. With two kids suffering from asthma, and one who throws herself into constant calamities, I couldn’t be more thankful for this system.

Commercial Breaks. In France, a 6-minute commercial break occurs once every HALF AN HOUR! The program doesn’t just ‘cut to black’, but we’re given a ‘PUBLICITE’ warning that it’s commercial time. When the French buy up an American series, they usually show it two episodes at a time in order to take up the same slot one episode would have taken in the U.S.  I remember how annoyed I was with the programming when I came back to visit the U.S.- the shows would just cut out every five minutes for a commercial. Sometimes I didn’t even realize we weren’t watching my show anymore! #easilyconfusesdpeople

Paid-At-Home-Moms One of the biggest reasons I love living in France is that the French government attributes ‘family allocations’ – basically a kind of salary if one parent decides to stay home and raise the children. Men have just as much right to this as women. For four years I was a paid-at-home-mom and was able to raise three beautiful children, which is something (with the price of childcare and medical expenses) I’m not sure I would have been able to do in the United States.

Thanks for having me Laura! I’ll be sure to hang out and answer any questions in the comment’s section. Can’t wait to read ‘A Spy Like Me’!

Thanks Katie! I love your posts about living in France.

No giveaway today but check out the three still happening.

Come back tomorrow for Elena Andrews and her young adult thriller, Run Like Hell! Every teen’s nightmare come true.

Feel free to ask Katie about living in France!