Dancing to Lady Gaga in jammies.

I remember high school. Almost everyone was a brand.

I remember the art geeks wearing black clothes and earrings high in the ear that looked like it hurt and I winced when I saw it.

I remember the football jocks who sat at the popular table, well, not all of them popular, but they liked to think so, or they hoped so.

I remember the popular crowd that started in middle school with only a small group of kids, all kids, all unsure, desperate to find a spot to call their own at the lunch table the first week.

As the years went by, the circle grew, and soon a large crowd of kids were friends by senior graduation. Some of those same kids who in middle school when alone at night in their bed, their covers pulled up to their chin, trying to ignore the tiny squeaking of a mosquito, dreamed of being in that crowd. And they made it.

Some never desired to be in that crowd. They were confident in who they were. Maybe their families went out for soft serve ice cream with sprinkles every Sunday night, they laughed, they talked. Maybe they played Monopoly on Friday nights and learned the value of not giving away all their valuables early on. Maybe a grandmother whispered in their ears that they didn’t need the validation of anyone else to feel important. And they believed it.

It was never about being popular even if they were convinced it was. It was about feeling loved, special, that they held a spot in this world and if they left, they’d be missed.

All kids move on from the bubble called high school and they realize it was all a game. They wish they could go back and tell themselves to not spend hours worrying.

Except then they enter the work world and they realize that the groups, the cliques, the popular crowds don’t fade away. They go to the Kindergarten playground and soon realize that certain mommies rule the school, even if it’s not obvious at first. They see it starting with their children, even at preschool, and realize that dealing with people is a part of life.

Maybe late one night, their kids tucked in bed, sleeping, they realize that the game always exists if one wants to play. This time, thankfully, they step back, away from the pressure, and choose their own course, their own happiness.

They stick their daughter’s earbuds into their ears and dance to Lady Gaga in their jammies, not caring if the neighbors can see through the window.

And they decide that’s the best place to be. 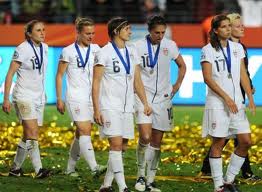 I read an article about the loss of the U.S. women’s soccer team to Japan. And as usual, I couldn’t help but take away some apt comparisons. Maybe it’s because I played soccer in high school and college. I remember the defeats way more than the victories. That feeling of utter disappointment and loss.

Stories that stay with me after weeks or years of reading them contain heart, heartache and loss, even if it has a happy ending. A character’s journey when meaningful and full of heart sears into my emotional memory.

If you didn’t know, the U.S. team lost in penalty shots. One of the hardest ways to lose a game, especially after possessing the ball more and having more shots on goal. How could I not appreciate what these girls were feeling as the winning goal (for Japan) hit the back of the net?  #thinkaboutyourrejectionletters

Confidence and state of mind.

I wonder at the state of mind of the U.S. women’s team going into the game. In previous World Cups, U.S. beat Japan every time. Every. Time. They were probably feeling pretty confident. That with a good game, at the end of the day, they’d be walking away with the winner’s trophy. #thisdoesaffectplay

Japan came in as the underdog. They knew from the get go they’d have to fight harder for the win. They didn’t feel the pressure of having to win. And their country was still reeling from a tsunami, so they wanted to bring home a victory. Give their people a reason to smile and cheer.

It wasn’t about who wanted it more. It was about state of mind and expectations.

Do you consider your character’s state of mind during their journey and how this affects their decisions?

Do you consider how confidence (not over confidence) might affect your writing?

Something to think about.

What books have stayed with you over the years? Why?

Riding the writing rollercoaster with confidence.

I love riding roller coasters. It’s the one ride at an amusement park I can still ride without getting sick. (Don’t ask about the crazy barn ride at Story Land. Just trust me, don’t ride it!)

I love the thrill of feeling the lurch as the cart chugs up the hill. The anticipation of reaching the top, and the rush of whooshing down with my stomach left somewhere at the top. (Okay, I probably could only ride it once or twice.)

I finish a first draft. Maybe the first set of revisions. Maybe, I’m polishing my words. I get excited. I love my story. My emotions are at a high as I consider querying and getting published. Okay, I admit it. I fantasize about the “call”. Guilty.

For every action there is an opposite and equal reaction. So as confident as I was feeling, one day, for no particular, I crash. My writing sucks. This is stupid. Why am I doing this? Am I just fooling myself?

I’ve finally learned how to ride the ups and down of being a writer.

1. Ignore the up, up, up. Yeah, have fun dreaming, but feelings aren’t always a good measuring stick for skill. Read books. Know the market. Have realistic expectations. Look at your writing with the rose-colored glasses on the table. (I know it’s hard.)

2. Ignore the down, down, down. Depression isn’t good. It causes writer’s block. It’s not good for you or your family. Or your writing.

Have confidence. Confidence in whatever stage you are at: beginner, advanced but not quite published, published but not sure if your book will spread, or incredibly famous you’ll be on Oprah.

I can experience the tippy top of the rollercoaster of emotions  but  know that its subjective. I can sink down into the pit of suckitis and still have confidence. Because these are emotions.

So in order to ride the emotional roller coaster of writing: realize you can’t stay on that writer’s high without crashing once in a while. Just don’t take it personally and give up on your dreams.

How do you ride the roller coaster of emotions that comes with being a writer?

Show me some attitude.

Is it a good thing or a bad thing? And what kind of attitude should we have as writers? Let’s see what happened on Idol this week.

Two differents contestants made it quite clear that there is a right attitude and a wrong attitude when it comes to being professional and pursuing your dreams.

This guy had to wait in the rain in Boston all day. And the longer he had to wait the more sulky he became. He scowled. A lot. And it was evident before he spoke a word that he was not a happy camper or singer. So, finally, when he saw the judges at the end of the day–well, let’s just say he didn’t do so well. He was rude (to Simon of all people). He was fresh. And he didn’t look like he wanted to be there at all. And even worse–he was defensive.

Did he get a ticket to Hollywood?   NO.  (And his singing voice wasn’t that bad. But his attitude painted everything from his conversation to his singing.)

This girl had to wait all day too. But not in Boston, in Atlanta.  She didn’t come in fawning all over the judges. She was sweet. She was polite. Professional. And she sang well. I don’t think she’ll be the next American Idol, but the judges all said yes. And they commented on her confidence. And that it was a good thing.

What attitude should we have as writers?

Some writers have a bad habit of putting themselves and their writing down, because they don’t want to come across smug or prideful. I realize we all experience the ups and downs of writing. You can experience a down time and still have confidence.

But confidence is much different than pride. When you are talking to agents, editors, other writers, fans, future readers on the phone, in person or online, it’s all about one thing. Being a professional. And part of that is being confident.

I have a bigger question. How does confidence or lack of confidence affect your writing – the words you put on the page?  Does it? (I think so.)

So go out there and get you some confidence. How? I’m not really sure. Any ideas?