A Valentines Day read – In His Eyes.

A Valentines Day read for anyone. 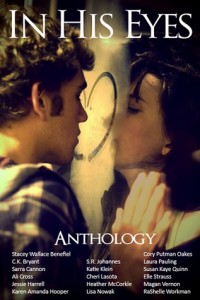 You’ll have to read these short stories to find out.

Valentines Day is more than just a mushy gushy sentimental sappy feeling. It’s about feeling emotion, the highs and lows. That’s what you’ll find in In His Eyes.

In my short story, The Almost Assassin, you’ll be meet Malcolm. He tries his hand at the family business but his conscience and a beautiful “spy” may be his downfall.

He hated to admit it but there was something mystifying about watching this girl in this beautiful park, her long dark hair teasing him. She seemed sad. Yet she was in Paris, the city of romance and light. He wanted to comfort her, to put an arm around, to play with her hair and bring a smile to her face.

Before he knew it, Malcolm was five feet behind her, then three feet. His breath hitched. He could almost reach out and touch her. So close. He peered over her shoulder, hoping to catch sight of her scribblings.

Hair whipped his cheek as she turned around, her face trapped between rage and fear. “What’s your problem?”

Malcolm froze, every bone and muscle refusing to cooperate. All his training drained from his mind and body. Her eyes, deep and blue, pulled him in and wouldn’t let go.

And this is just the beginning of Malcolm’s rocky road, which continues in A Spy Like Me. (Spring 2012)

Check out the rest of the authors and their stories in the anthology.

99 cents at Amazon and Barnes and Noble.

Surprise, Surprise by Stacey Wallace Benefiel, author of Glimpse: Half the women in Melody’s family can see the future, which makes it nearly impossible for Raleigh to surprise her. What’s a guy to do for Valentine’s Day when his girlfriend is always one step ahead of him?

First Kiss or First Kill? by C.K. Bryant, author of Bound: Love isn’t always rainbows and kittens, sometimes it can be downright deadly. (A deleted chapter from Bound.)

Shattered by Ali Cross, author of Become: James and Desi use each other in an effort to cling to the darkness in each of them, but in the end they discover that love changes you. (A chapter of Become from James’ POV.)

Before by Jessie Harrell, author of Destined: When a younger Eros is exiled to a land that doesn’t believe in the Greek gods, he finds the first love of his immortal life. Read Eros’ first person account of his romance, and heartbreak, in the time before he met Psyche.

Unspeakable by S.R. Johannes, author of Untraceable: When Mo sees a strange girl in the woods, he follows her. He soon realizes they are both in a dangerous position and might not get out alive.

In the Beginning by Katie Klein, author of Cross My Heart: Seth is falling hard for Genesis Green, but the guardian angel is determined not to interfere, until an accident changes the course of their lives forever. (A short prequel to The Guardian.)

A Chance Encounter by Cheri Lasota, author of Artemis Rising: Finnian’s eyes hide a terrible secret. But a girl on the train home, the girl in tears with a secret of her own…She sees right through him. A scene from the upcoming novel, Echoes in the Glass.

Family Bonds by Heather McCorkle, author of The Secret of Spruce Knoll: A Halloween party filled with teens who can channel energy and use it to kill, what could go wrong? For Spruce Knoll fans who are dying to read more about Fane.

Getting Closer by Lisa Nowak, author of Running Wide Open: Megan is smart, hot, and an upperclassman—in other words, way out of Cody’s league. So why did she choose him? (An excerpt of Getting Sideways.)

The Almost Assassin by Laura Pauling, author of A Spy Like Me, releasing Spring 2012: Malcolm tries his hand at the family business but his conscience and a beautiful “spy” may be his downfall.

Mind Games by Susan Kaye Quinn, author of Open Minds: Raf wants to take Kira—the only girl in school who doesn’t read minds—to the mindware Games, but his friends have other plans. (A short prequel to Open Minds.)

By The Firelight by Elle Strauss, author of Clockwise: When Nate McKenzie asks an unpopular girl to dance on a dare, he’s in for the time of his life.

A Very Alien Valentine’s Day by Magan Vernon, author of How To Date An Alien: After surviving confinement and an intergalactic war for his human half, Alex, now he has to live through the biggest challenge of them all: Valentine’s Day.

Aligned by RaShelle Workman, author of Exiled: A half-Eternal boy and an Eternal girl must free millions of tortured souls from a creature whose been feasting on their pain and suffering.

So are you a mushy gushy sentimental sap on Valentines Day? Or do you think it’s just a big marketing scam?

Winner of the Kindle Fire will be announced soon at the Indelibles blog.Contestants are being verified.

And the winner of THE LIAR SOCIETY by Lisa and Laura Roecker will be announced tomorrow!

Welcome to the Indelibles blog hop!

Marketing guru Shelli Johannes Wells has teamed up with twenty-four other indie and small press authors to brings you the Indelibles. (Yes, I’m one of them!)

Each week we’ll explore fun, fabulous, and fierce topics for today’s teens, drawing on pop culture and themes from the books we write. We’ll also be having a “blogger” chat and a writer/author chat to answer questions about self and indie pubbing. Details coming soon.

In celebration of our official launch, we are giving away a KINDLE FIRE! Woo hoo! Start at the Indelible writers blog. The contest runs from 12:01 a.m. Monday to 12:01 a.m. Thursday.

If you are mid-hop, then welcome to your next stop! By following the link at the bottom of this post, you can proceed to the next author (and check out the awesome, individual giveaways we are doing along the way!) If you are entering to win the KINDLE FIRE, don’t forget to make a note of the keyword at the end of every blog post – the words spell out a phrase you will need to enter the contest on the last stop.

And now a little bit about me. 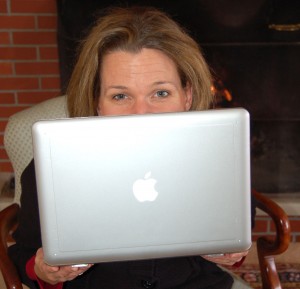 She lives her cover of suburban mom/author perfectly, from the minivan to the home-baked snickerdoodles, while hiding her secret missions and covert operations from the real world.

And her kids wonder what she does all day while they’re at school; or why on Monday mornings she’s a bit grumpy.

Living the life of a secret agent isn’t easy, but someone has to do it. But shh – don’t expose the truth to her friends and family.

Her debut YA novel will release in spring of 2012.

From the top of the Eiffel to the depths of the catacombs, Savvy Bent must sneak, deceive, and spy to save her family and friends and figure out whether Malcolm is one of the bad guys before she completely falls for him.

Check it out on Goodreads!
Connect with Laura on Twitter!

Wait! Did I forget something? Oh, yes. My giveaway. My SURPRISE giveaway open to the U.S. and Canada. Want some clues? Okay, fine. Paperback. Published in 2011. Young adult. Hilarious. pink hair. All you have to do is comment. Feel free to take a guess. Every day I’ll add a new clue until the contest is over Thursday at 12:01 a.m. You only have to comment once.

A second winner can choose an ebook from one of the Indelible authors! (You’ve got some majorly awesome choices!)

The word for the blog hop is: WRITERS

And don’t forget to click ahead to the next stop at the author of the incredible book, OPEN MINDS! Take a guess at who it is? Click here.

Good luck! And thanks a bunch for stopping by!