Welcome back to the second week of Spies, Murder and Mystery! Celebrating my release of A Spy Like Me!

Today we have Nova Ren Suma with us. She’s the author of Fade Out and Imaginary Girls. Both will be released in paperback in June with new covers! I read this book called Imaginary Girls and ended up loving it! The mythical relationship between sisters is not easy to show and having an older sister, I related. So I asked Nova to talk to us about mysterious girls.

Nova has run some incredible blog series about Turning Points and authors of upcoming releases. Check them out if you haven’t yet. 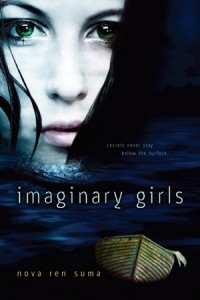 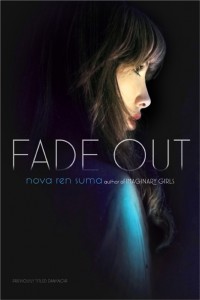 I’m drawn to mysterious characters. The characters who give you pause, who make you question. The ones you need to know more about… And then you discover that the more you know, the more mystery there is to unravel. They’re complex. They’re flawed. They’re impossible to truly know, which to my mind makes them all the more real. I think that’s why I created Ruby, the larger-than-life older sister in my novel Imaginary Girls, or, really, why Ruby found me and forced me to sit down and write about her. I wanted to know who she was, and she wanted to play a cruel little game with me to keep me guessing.

It’s the mystery of Ruby that propels that novel—and so much of that comes from telling the story in the voice, and through the lens, of Chloe, the younger sister who idolizes every single thing Ruby does and yet still doesn’t fully understand her. She can’t. I admit I loved telling Ruby’s story through those eyes. I never want a mysterious girl to be stripped of all her mystery.

I wonder where this fascination came from. Even in my first published novel—originally titled Dani Noir, but you’ll see a new version of it on shelves this June called Fade Out—my narrator, Dani, goes searching for a mysterious femme fatale in her small sleepy town, even if there’s no true “femme fatale” to be found for miles. There are the secrets. The lies told behind closed doors. And how Dani idolizes a true mystery girl on-screen, none other than Rita Hayworth, star of glamorous noir movies like Gilda.

Even my upcoming book, 17 & Gone—which is such a mystery I haven’t revealed the summary yet!—is peopled with a whole cast of mysterious girls. You might just say the book wouldn’t exist without them.

I’m simply intrigued by a girl who inspires questions. And I don’t want easy answers.

So who are some mysterious girls from books I’ve read that catch my imagination?

Hannah in 13 Reasons Why by Jay Asher: The whole story is set up to unravel Hannah and reveal why she chose to take her own life. Once the truth is exposed, it’s heartbreaking.

Bev in The Disenchantments by Nina LaCour: Colby can’t keep his eyes off Bev, and neither can we. Why does Bev do what she doe—say one thing and then change her mind and do another?

Mandarin in Like Mandarin by Kirsten Hubbard: I remember being drawn to girls like this when I was in high school, wanting to be their friend, never at first realizing what dark, unruly secrets they kept hidden.

Holly Golightly in Breakfast at Tiffany’s by Truman Capote: I know this one isn’t YA, but I can’t help but be obsessed with the mysterious, fascinating figure who makes this novel what it is. We only see her through the eyes of another, and we never quite catch up to her.

Francie in The Blonde of the Joke by Bennett Madison: In this novel, Val tries to be like her gorgeous, exciting new friend Francie, but who is Francie, really? And what does becoming like Francie really entail?

Margo Roth Spiegelman in Paper Towns by John Green: It’s an obsession with the girl next door that drives this mystery and the ensuing adventure adventure. We want to climb out the window and follow her into the night.

Who are some mysterious girls you find yourself drawn to in books?

Comment to win a pre-order of the Imaginary Girls paperback or a signed copy when Nova receives her author copies. Your choice! And please tweet with @laurapauling. Thanks!

37 Responses to Nova Ren Suma and those mysterious sisters.