Warning: scandir() [function.scandir]: (errno 2): No such file or directory in /home/content/82/6039282/html/_sites/laurapauling_com/wp-content/plugins/better-wp-security/core/modules/backup/class-itsec-backup.php on line 273
 Never Surrender – the man who never gave up. | Laura Pauling

Never Surrender – the man who never gave up.

There is a man who lives somewhere in my neighborhood. I don’t know his name and I don’t know his complete story. But I’ve been watching him for years; and each year, as a little piece of my heart breaks, my admiration grows exponentially. Especially when I saw him a few weeks ago. 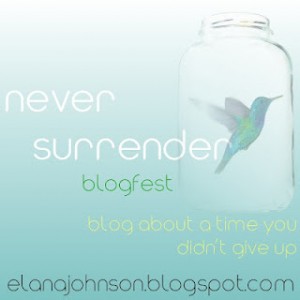 At first, I was amazed at how much this guy ran. I’d pass him every afternoon during my daily run, but then I’d pass him on the roads in the morning too – when I was in my car. And then, sometimes I’d see him out a third time. Or did he stop running? Maybe he’d been running the whole time?

I thought he ran a little funny, his body jerking back and forth, but we all have our own running style and I didn’t think too much about it. After a year or so, something changed. He was running just as much if not more but now he was carrying a stick about the size of a baseball with him when he ran as if it helped him to stay balanced.

That was the first time when it occurred to me that he must have some sort of debilitative illness. The thought of that made me extremely sad.

Years passed and he’d still run, day in and day out, seemingly as much as he could, every chance. Then I noticed he ran with a partner and tears pricked my eyes at the dedication and the support his family was showing him.

During this time my kids have grown and passed milestones, healthy and happy. A couple years ago, he wasn’t running anymore. He was walking. And now it wasn’t just his family but some of our neighbors walked with him. Every day. For miles. All year. Still I’d pass him every day. A couple times I’ve stopped to chat because my next-door neighbor was with him.

Then a couple weeks ago, I sobbed. In my car. He was walking; but this time, someone walked with him and he had a strap around his waist that the other person held onto.

I couldn’t believe his dedication, his fight, and the fact that he never surrendered even though he was only going to get worse.

I scan the roadsides for him every day, wondering if I’ll see him again. Even if he’s now homebound, I know he’s still fighting in every way he can.

When I think of never surrendering, I think of him. Yeah, sure, writing and publishing is hard but with the right perspective all I can be is thankful.

This blogfest is to celebrate Elana’s Johnson’s release of Surrender. I loved this story and the characters, Raine and Gunner. In their own ways, they never surrender. An excellent book and I highly recommend.

19 Responses to Never Surrender – the man who never gave up.