Inspiration in a stranger and a cover reveal.

I’ve never talked much about what inspires or motivates me to spend the time writing a premise into a novel. Trust me, I’ve got plenty of premises, even in-depth outlines, even whole books written (one trilogy) that most likely will never reach readers.

Don’t we all though as writers?

Never mind all the premises and stories that never made it out of my head, and died before having the chance at life. (My deepest apologies to all those ideas and characters who maybe wanted a chance. Sorry, this isn’t a democracy.)

As you might have noticed I love mysteries. I love stories with only a hint of mystery. I love heist stories. They fascinate me. I love romantic mysteries too.

What you might not know is that I love characters who aren’t the best looking or the most confident. I love when the romantic element is messy and troublesome, where the characters have to embrace the flaws in the other person even if they never have that turning point where they’re able to overcome them.

A year or so ago I was inspired by a stranger. He wasn’t particularly good looking. He had a hawk nose. He wore an elegant scarf around his neck, along with this faux-looking leather coat. I never met him, but I had so many questions. I sensed this false arrogance that possibly covered deep insecurity. I never met him. Never talked to him. 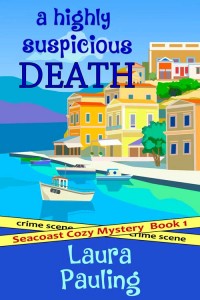 At that point in my life, and currently, I desperately needed humor. I needed to laugh. I wanted to write a comical,  somewhat unrealistic, and over-the-top kind of story. I wanted it to be a murder mystery of sorts. Maybe it was everything happening in the world, all the heartache and sadness. I couldn’t read the sad books. I couldn’t write them. Still can’t.

I pictured a fictional town on the New England seacoast. (I also love pirates and the rumors of lost pirate treasure that I hear about in New England. So I had to include that.)

So is this story a cozy mystery? Yes…sort of. It’s really a love story between two imperfect people overcoming and facing their false egos, their pasts, and their insecurities. (It’s definitely not a police procedural as there is not one element of real police work. Not really.)

I had a blast writing it. I lost myself in the story and the characters. Next week, I’ll reveal chapter one and provide a chance to win an ebook before the release date.

See you next week! (Feel free to comment on any uplifting or humorous books you’ve read of late!)

← What I learned writing a six-book series.
Read chapters 1-6 of A Highly Suspicious Death! →

6 Responses to Inspiration in a stranger and a cover reveal.