Warning: scandir() [function.scandir]: (errno 2): No such file or directory in /home/content/82/6039282/html/_sites/laurapauling_com/wp-content/plugins/better-wp-security/core/modules/backup/class-itsec-backup.php on line 273
 Illustrating: How To Survive Ancient Spells and Crazy Kings. | Laura Pauling

Illustrating: How To Survive Ancient Spells and Crazy Kings.

By Laura on September 17, 2012 in guest posts, murder and mystery, The Maya

Meet Ernie D’elia, illustrator for How To Survive Ancient Spells and Crazy Kings. He received a degree in illustration from the American Academy of Art in Chicago and currently lives in Massachusetts.

I invited Ernie to talk a little bit about the thought process behind designing the cover. I had the privilege of meeting him last spring at New England SCBWI. Of course, at the time I didn’t realize he’d be my illustrator.

I absolutely love that Pugalicious Press chose an upcoming talented artist from New England to design the cover. His artwork is incredible. Now, here’s Ernie.

“How do you feel about Mayans?”

That’s what Jennifer Carson from Pugalicious Press asked me.

I said, and in a few short days I had the manuscript for “How to Survive Ancient Spells and Crazy Kings” in my hands.

When I finished reading it I started sketching some loose ideas. A couple of the earlier sketches had some drama, but lacked an overall vision. As I worked I realized the feel of the book, to me, was very cinematic, so I decided the cover should have an adventure-movie poster feel. Once I decided on the movie poster approach, it all fell into place.

Here’s a quick breakdown of the elements:

First, everybody knows that every good adventure-movie poster has the villain looming menacingly in the background somewhere, so the “Crazy King” had to loom, and he had to be menacing. Head down, scowling, and about to pounce, his body language doesn’t say happy and friendly. I thought the jaguar headpiece from the story would be a great way to add to his ferocity. 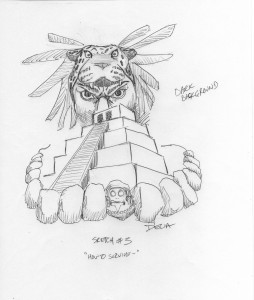 Second, to establish a setting I placed the Mayan temples below the “Crazy King”. Now there was no mistake: he was a crazy Mayan king.

Third, the necklace gives us the “Ancient Spell” part. It was also an important piece of the story, linking our modern day heroes to this ancient setting. In the painting it loops around them, pulling them into this world. 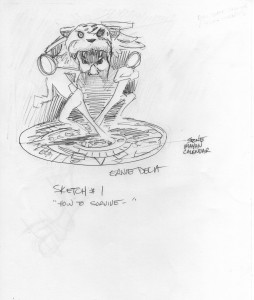 Lastly, I placed the main characters, Bianca and Melvin, right in the middle of it all, surrounded by the dangerous villain and the mysterious glowing green jade necklace. But do they look scared? No. They’re confident, determined, and daring!

There are an additional six black and white illustrations at key points inside, but to see those you’ll have to wait till the book comes out.

From creepy to scary to joyous, “How to Survive Ancient Spells and Crazy Kings” is a great adventure, and I loved doing the artwork for it. Thanks to Laura for writing such a thrilling adventure, and thanks to Pugalicious Press for asking me how I felt about Mayans.

Pugalicious Press sent me the sketches and I chose the one that appealed to me the most. So the following sketch… 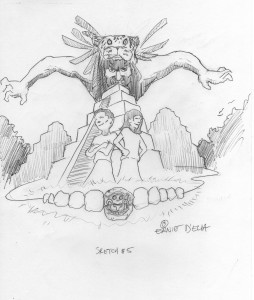 …turned into the cover! 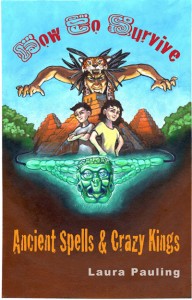 Thanks Ernie! I love the cover! I also love the black and whites that will grace the inside print copies. They’ll be fantastic! Can’t wait for everyone to see them.

23 Responses to Illustrating: How To Survive Ancient Spells and Crazy Kings.