Heist is FREE! And a new release!

As writers whether we self publish or go traditional we have to decide between writing for love or money. Do we write the trendy genre? Or write what’s in our heart. These books, even though written several years apart, are from my heart. I combined my love of heists with the emotional resonance of families working through healing and heartbreak and truth.

Sixteen-year-old Jack Brodie time travels back to the world-famous Gardner Heist. When he returns his life has changed for the worst. He keeps returning to the crime to fix his mistakes until he has the ultimate choice: his family and his own happiness, or the girl he loves.

A Royal Heist is live! This is the sequel to Heist. 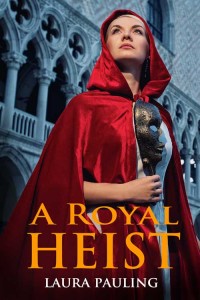 Annabelle longs for freedom, trapped in a life where she feels like nothing more than a vapor, a ghost flitting through time. Under the strict and often cruel direction of her grandmother, she travels back to famous heists and steals art. In a moment of utter despair and rage she commits an unforgivable act. As a result, she’s sent back to the 1600s on a royal heist—to steal the Crown Jewels—in nothing more than a state-issued nightgown. A death sentence.

In a second reality, in that moment, she receives a weathered scroll with instructions not to kill her grandmother and to pass a message onto Fiasco. But who is Fiasco? And how can he help? On her next big royal heist, she faces the stark reality that she is in a race to steal the Crown Jewels with another version of herself from a different reality.

It’s a race for survival.

← Any Way You Slice It – COVER REVEAL!!!
A new sleuth and a FREE cozy mystery! →

2 Responses to Heist is FREE! And a new release!