Heart of an Assassin 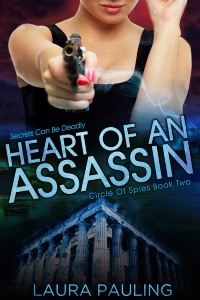 Secrets can be deadly.

In Paris, Savvy fell for Malcolm, the hot assassin, before her mom whisked her away. In Greece, Savvy meets up with him in the most awkward reunion ever…and almost gets him killed. Fail one. Her mom gives her one easy spy mission, one chance to prove she’s ready, except she breaks the rules – for good reason, of course – and the mission implodes. Fail two. To prove her worth, Savvy lies to her mom and boyfriend and strikes a dangerous deal with Malcolm’s family.

All that seems trivial when an enemy threatens both families. Savvy has one last chance. She must convince their families to work together and infiltrate this unseen foe in her most dangerous mission yet.

But nothing can prepare her for the sacrifice she’ll have to make. One that might tear her and Malcolm apart forever.

The cold sensation started as an itch on the back of my neck, like a spider crawling. The imaginary legs tap, tap, tapping against my skin, the tiny hairs bristling and tickling.

I shivered then shrugged it off, blaming it on a cold draft. Thankful the hood of my sweatshirt kept my face in shadows. My hands were jammed in the front pocket, my fingers running over and over the smooth casing of a pocketknife.

Mom told me to infiltrate the market place of our seacoast village in Greece. She wanted me to study five people to determine their economic status, why they were shopping, if they were happy or not, their age, marital status, the color of their underwear, blah, blah, blah.

I’d been doing this every week for the last few months when I really wanted to jump from planes or attend fancy parties as a seductive spy and duel with swords in the dark shadows. Cool things. I was tired of observing people haggle over the price of a radish.

But ever since my adventures in Paris, where I solved the mystery of my best friend’s disappearance and rescued a monk from captivity all while outwitting a family of assassins—yeah, ever since all that, Mom had been a wee bit overprotective.

I drew closer to the crowded streets, totally incognito in my average teen girl clothing, and took in the increasing chatter of the crowds: the deep bellows of merchants trying for a sale, the whine of toddlers begging for some shiny toy or piece of candy, and the quiet hum of ongoing conversation. Beaded jewelry twinkled in the sun, glitter on T-shirts flashed, and friendship bracelets and handmade necklaces hung in a variety of brilliant colors. I searched for my first target and for something sweet to snack on while I observed.

I found the sweet dessert first. After I paid the man, I cradled the pastry in the palm of my hand. The wafer thin layers with walnuts were soaked in sweet honey syrup and tasted absolutely delicious.

The itch on the back of my neck grew to a prickle and the spider crawled down my back. This time I couldn’t ignore it or blame weather patterns, and my hoodie didn’t offer much protection or camouflage. I quickened my pace, the need to hide rising above my training mission. I ducked one way, then scooted between two old ladies, but the feeling remained. Someone’s eyes were on me.

No one knew Mom and I were hiding out in Greece, but I made constant sweeps of the thickening crowds and pushed through the old, the young and the in-between. A lady with her messy hair piled on her head hassled a seller for a lower price on lettuce. As the seller ran fingers through his bushy black hair and argued, I inched backwards under the shade of his tent. Hiding. Hoping that no one noticed me.

Heat flushed my body and instinct screamed at me to get home. Fast. Each person who looked in my direction caused my heart rate to triple. I took several meditative deep breaths and merged with the crowd, acting like I suspected nothing. I bought a head of lettuce, and held onto it like it could protect me in a fight. I moved to the next cart and bought onions, even though Mom can’t stand them. At the next cart, I used the last of the change and bought fresh flowers, then robotically turned and moved toward home, past the fresh produce and back into the touristy carts. As I moved from the thicker crowds and turned onto a side street, my body tensed. Footsteps fell in line behind me.

I stopped and slowly turned, ready to take them out with whatever method I could even if I had to bombard the guy with onions or offer up my dessert in exchange for my freedom. That would totally work on me.

I certainly didn’t expect the Rastafarian teen who looked like he didn’t belong here anymore than I did. Long brown dreadlocks hid his face. He banged his head and swayed to the beat pounding in his ears through his ear buds. No guns. No black clothing or hulking men out to get me.

He made beat box noises and drummed his legs with his hands. I froze, feeling stupid staring at his matted hair for no good reason. When he moved into my personal space, I freaked out and couldn’t convince my legs to run home. So much for a glorious confrontation. I tightened my grip on my pastry, ready to smash-in-the-face and run.

He rocked out, and just inches from me, turned his back. “Don’t act like you know me or that I’m talking to you.”

Feelings that I’d kept pressed down bubbled up and spilled over, washing me with memories. Paris. Kissing. Rushing through the streets of the Extravaganza. Malcolm. For some reason my vocal chords wouldn’t cooperate and I said nothing.

He kept his back to me, pretending to listen to music. He said nothing while a mother strode by with her three children. My breaths came faster and faster. There was only one reason he would be in disguise and talking to me so secretly. Someone was following him or following me. Probably his family. As in his older brother, Will, the one who put a bullet in my leg in Paris. I had known it was a possibility, but this made it real. This was not how I imagined our reunion. And all my thoughts about wanting excitement felt like a complete lie.

“We need to talk,” he said. “Tomorrow night, near the docks you’ll find a bunch of sailboats. Find the one almost at the end. Both sails will be down and Mozart will be playing. I’ll be waiting.”

Then as if he was a one-man band he drummed his hands against his legs and moved on down the street until he rounded the corner. I sank my teeth into the pastry, letting the caramelized sweetness distract me from the many thoughts running through my brain. But one in particular managed to break through and repeat.

Malcolm had found me.