By Laura on June 4, 2012 in book reviews, three dimensional characters

Description: The thrilling and seductive sequel to Possession puts love on the line in a dystopian struggle for independent thought.

Forbidden love, intoxicating power, and the terror of control… 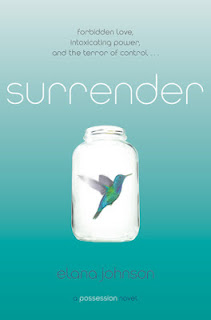 Raine has always been a good girl. She lives by the rules in Freedom. After all, they are her father’s rules: He’s the Director. It’s because of him that Raine is willing to use her talent—a power so dangerous, no one else is allowed to know about it. Not even her roommate, Vi.

Thank you to Simon Pulse for the advanced copy!

I could talk about Surrender and how much I loved this book, the writing. I fell in love with the characters: Raine and Gunner. Both of them have been the most enjoyable YA characters I’ve read in a while. Elana does an incredible job in drawing us into the story: we live, breathe and cry with them.

Of course, it’s nice to see Jag and Vi too.

I enjoyed Possession but Surrender blows the first book out of the water. Can I say that? Well, I did. I didn’t want the story to end. Some of the passages took my breath away.

I could talk about all that but I’m not going to.

I want to talk about Elana. She’s always been so giving on her blog. She’s down to earth and never pretended to be someone she’s not. She got published and still acted like a normal human being. She’s one of the organizers of WriteOnCon, which takes a huge amount of time – I can imagine. Basically, we’ve seen her everywhere.

So if you want a breathless read with incredible characters and writing then buy Surrender. It releases Tuesday!

And don’t you want to find out what happened to Jag and Vi….?

But wait you didn’t read Possession?

That’s okay. Surrender is a companion novel and you can read it without having read Possession. It helps but not necessary!

Elana organized a cool blogfest next week. Sign up on her blog to post about a time you never Surrendered. And you have to read her blog post about Fear. Elana at her best – open and honest.

Purchase Surrender at Amazon or Barnes and Noble.

Who are some of your favorite YA couples?

Is IT’S A WONDERFUL LIFE really a YA novel?

By Laura on December 12, 2011 in Plotting a novel, three dimensional characters

Think about it. It’s an angel story. Okay, so there might not be a hot angel stud in it, but Clarence is definitely not your typical angel. There is a character named Potter in it. And think about the firsts – first kiss, first love, first job, first save-your-brother-from-drowning, and first…well, you get the point.

Here are the ten reasons I love this movie from a writer’s point of view.

1. Opening prayers that make me care for George Bailey. Why is he in so much trouble? Why is everyone praying for him? I want to know!

2. Every single scene is important to the story. They deal with George, Mary, or Potter; and of course, don’t forget the Bailey Building and Loan – that crummy old building.

3. The scenes start late and end early. No fillers! I sit down to watch for five minutes and I end up watching the whole darn movie.

4. Every scene contributes to the main storyline but also has its own storyline. Almost every scene ends with a cliffhanger. For example, George leaves Mary in the bushes to go see his father who had a stroke.

5. Humor is added to each scene: George and Mary falling into the pool or Mary losing her robe.

6. A great debate is introduced in the beginning. Will George take over the Building and Loan or go and travel the world? He chooses to stay but always holds onto the dream of leaving.

7. George is an extremely likeable character. He’s not off to save the world. His goals are really quite selfish. But every decision he makes, putting himself last, comes at huge personal sacrifice. For example – his hearing, his college, his travels, his honeymoon.

8. Incredible secondary characters. Their stories and pivotal moments are revealed when they connect with George’s life.

9. Let’s not forget the mirror images of the first and third act. Every scene in the first act, the characters who are introduced, come into play in Act III.

10. George never reaches his goals. I mean how often does that happen? But that makes the ending so moving. He realizes he had a better life than the one he dreamed about. So primal. Sigh.

This movie is so different from JINGLE ALL THE WAY, but I love them both!

By Laura on October 26, 2011 in three dimensional characters

At times, my life is full of conflict. I struggle to be the best mom possible when two of my kids are exactly like me, that is, a bit strong willed and determined.

My life would be so much easier if I was one of those moms who had patience and love bubbling over like a fountain in some romantic foreign city when their son spills the grape juice from his Flavor Ice onto the newish couch when he knows he’s not supposed to eat in there and it’s now a permanent stain.

Or when that same son yells out early in the morning on a Saturday that he broke the faucet, and everyone is sleeping in or trying to on the one day of the week they can.

Let me tell you, instant conflict.

Does your character offer the most conflict for the situation? That question comes up in SAVE THE CAT. In other words, the main character should be the worst person for the job, because for obvious reasons, there is instant conflict. And a lot of times, adds humor.

Here are some examples from books and movies:

Romancing the Stone: Novelist with no real adventure experience goes off on a crazy adventure with the man of her dreams.

The Girl of Fire and Thorns: Extremely overweight princess with a major carb addiction is born with the Godstone, which means she is meant for greatness.

Harry Potter: Boy with absolutely no wizarding power or experience needs to take down the most evil wizard ever.

Anna and the French Kiss: Anna is sent to a boarding in school in Paris but would much rather be at home in her safe world.

I’d Tell You I love You But Then I’d Have To Kill You: Cammie Morgan falls in love with a boy in town, except she’s been trained to be a spy and knowing 40 languages doesn’t prepare her for her first major crush.

Just think how different these stories would be if the character had been “perfect” for the story.

This is just one method of introducing conflict to a story and starting the emotional arc. I’ve looked and there are plenty of high concept and low concept books that don’t use this method and they are still extremely successful.

Have you ever thought about crafting your character to be the worst possible one for the role? And is there anyway to lift a grape juice stain from a couch? Just askin’.

By Laura on October 24, 2011 in Plotting a novel, three dimensional characters

We’re going to spend the next few weeks studying this incredible book. THE SKY IS EVERYWHERE by Jandy Nelson.

Okay, truth time. I put off reading this book for a long time– why? I’m not even sure anymore. I chose it specifically for studying structure to see if a fiercely character-driven and more literary book would hold up to structure. And I’m so glad I read it. So, let’s take a look.

Logline: (from the inside cover)

In the months after her sister dies, seventeen-year-old Lennie falls into a love triangle and discovers the strength to follow her dream of becoming a musician.

High concept or no?

Doesn’t sound it from this description, does it?

But I’m going to say yes. This is about something big. Death and grieving and survival. And that pushes it up into the arena of high concept, for me, anyway. You are free to disagree.

1. Does the character offer the most conflict for the situation?

Lennie lived in the shadow of her older sister, Bailey. And now she has to learn to live without her. I’d call that conflict. Not shoot ‘em up conflict but still powerful.

2. Does she have the longest way to go emotionally?

Yes. A very big yes. She wasn’t a particular strong person before her sister died. And similar to the above question, she not only has to overcome grief, she has to figure out who she is as a person. As an only child.

Again. Yes. A teen girl dealing with death. Many, many teens deal with loss. Almost anyone can relate to this story.

I probably don’t have to answer this one. But any story dealing with life and death is primal. So, another big yes!

By definition and compared to other “big” stories, the logical person would say this book is not high concept. But, to me, this story was BIG. It was more than just a sweet romance or mystery. Through out the story, Lennie works through her grief and has to decide whether to truly live her life or not.

What do you think? High concept or not?

Come back next Monday for a look at Act I of this terrific book.

By Laura on September 2, 2011 in book reviews, three dimensional characters

Nothing proved to me how subjective this business is until I read and loved IMAGINARY GIRLS by Nova Ren Suma and then read the reviews on Amazon and Goodreads. 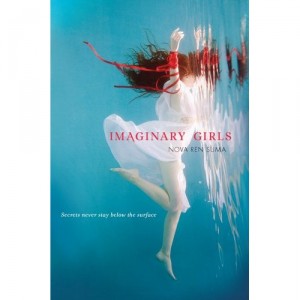 I mean I loved this book. Gorgeous prose and a voice that pulled me through the book. A combination of creepy, paranormal, and mystery.

And no one denies any of that in the reviews.

The biggest complaint is that the magic or paranormal aspect in the book was never explained. The term plot holes was used.

Some said the characters weren’t likeable. Ruby and Chloe (the narrator) were not good role models. #itotallydisagreed #lovedthem

Some said by the end they realized there was no point to the story.

Harsh? Right? I would argue against all those points!

Please don’t let that deter you from reading. I think the story was misunderstood. And it helped that before reading, I knew some things wouldn’t be explained. I was prepared.

As I see it, this story was a tall tale. A myth. A metaphor for the love of two sisters who have a crappy life. The older sister Ruby seems to have a magical hold on the town and on her sister, Chloe. But when you understand that these two girls are half-sisters whose dads aren’t in their lives and their mom is a drunk? They basically raised themselves. It’s a bit easier to understand their eccentric behavior.

In a tall tale the unexplained happens all due to the power of an emotion. It’s not meant to be explained. That would detract from the magic. Ruby comes to the conclusion that her sister is able to bend the rules of physics because of their bond, their love for each other. And for the magic to be explained and there to be a believable explanation for what happens with the dead body and why the whole town bends to Ruby’s desires would detract from the whole point of the story.

You can disagree. But don’t the let the reviews deter you from this delicious book. There were plenty of five star ratings too. Honestly? It’s this kind of writing and story that separates the traditional published and the self-published. For me.

Do low-starred reviews deter your from buying a book? Do you ever find a discrepancy based on subjectivity?