Welcome to my first cozy mystery series for adults, starring Holly Hart, the amateur sleuth and cheesecake connoisseur. Right now, Murder with a Slice of Cheesecake is FREE!

GET YOUR FREE BOOK 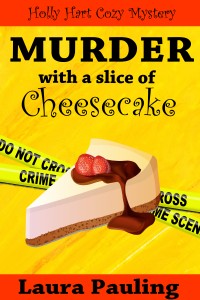 Holly has a plan to escape the rigid confines of the life her parents have planned for her. She wants to open up a cheesecake shop and live peacefully in a small town. But when her Aunt Lizzie is murdered, Holly’s plans are ruined, because her aunt was funding her escape.

Determined to solve the mystery of her aunt’s murder, with the help of Muffins, her dog, and her childhood best friend, Teddy, she embarks on a trail of clues that will lead to family secrets she’s not sure she ever wanted to know. Especially, when the killer notices and she becomes the next target. 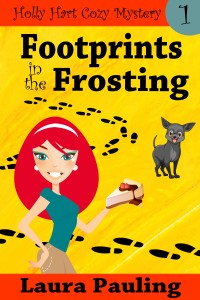 It’s the Grand Opening for Holly Hart’s new business, Just Cheesecake. When footprints in the frosting lead to a body facedown in one of her cheesecakes, Holly becomes a prime suspect.

With her opening day delayed, Holly deals with a nosy no-good reporter and the local cop, the handsome Officer Trinket, as she puts her sleuthing skills to the test to save her business and her name. With the help of her dog, Muffins, she needs to find the real murderer, before the killer looks to frost someone else. 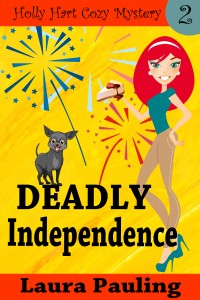 The Fourth of July means cookouts and celebrations. While selling cheesecake tortes at the fireworks, Holly rescues an elderly lady from a stray firework. Except Agatha Poppleton wasn’t dozing—she’s dead. It’s up to Holly with the help of her friends and her dog, Muffins, to solve the murder, before the killer decides it’s time for Holly to meet her maker. 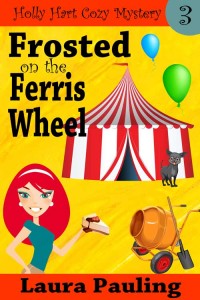 It’s summertime, but not everyone is having a vacation. The owner of Sunny Side Realty is found buried in a bath of cement. Holly and the gang dive into the investigation, except Holly is distracted when she spies Trent on a date with her nemesis, Millicent Monroe.

After failed undercover operations, they have one final attempt to figure out the identity of the murderer. Millicent and a Great Dane with social anxiety might be Holly’s only hope when she goes off the grid. Who’s next on the list to cool off with a deadly dip? 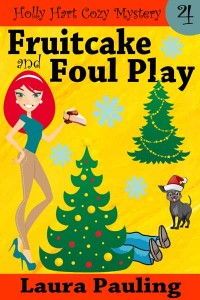 Holly literally stumbles over a body while shopping for a Christmas tree at the Wixler Farm–and then the body disappears. All traces vanish under the falling snow. Charlie Wixler, his wife, and the intruding neighbor are hiding secrets. What does a stolen fruitcake recipe have to do with it? And is it important?

Between and during double dates with Trent and Russell, she and Millicent go undercover, escaping the watchful eyes of their boyfriends. But it isn’t all fun and games when they track down the killer and look death in the face. 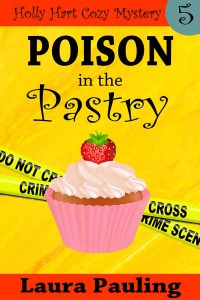 Three famous mystery authors visit Holly’s town. One of them never leaves. Is it murder?

While sleuthing, Holly juggles her relationship with Trent and good old-fashioned blackmail. Millicent dug into Holly’s past and has a long list of demands. Holly worries her past will be exposed and her cover blown. She gives in to Millicent’s random demands, even heading undercover on a rogue investigation. More secrets simmer beneath the surface than just the authors’ pen names. When Millicent lands in jail, Holly faces the moral decision of helping her frenemy or celebrating. Behind it all, someone’s playing twisted games. 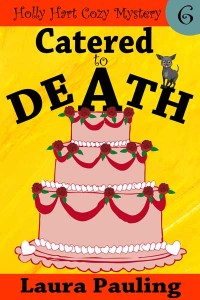 Life is smooth sailing for Holly Hart until she wakes one morning and spots Theodore lurking outside Just Cheesecake. Why is her childhood friend-turned-enemy in town? Supposedly, he wants her business to cater a family party. Suspicious indeed. Especially when he’s been spreading lies about Holly’s family back in her hometown.

When she sneaks back to her parent’s home and finds a body in the living room–almost as if someone was setting her family up for murder–she makes an impulsive decision. She hides the body.

Holly has to figure out how to reveal the real killer. If he doesn’t get to her first.