Warning: scandir() [function.scandir]: (errno 2): No such file or directory in /home/content/82/6039282/html/_sites/laurapauling_com/wp-content/plugins/better-wp-security/core/modules/backup/class-itsec-backup.php on line 273
 Laura Pauling | Author of Spies, Murder & Mystery

Writers work in all different ways.

Some writers need to have every plot point outlined. They have character charts, sketches and webs on every major and minor character. They write a plot treatment. They outline. They write out samples of dialogues and scenes in order to get a feel for their main character. They need to see to the end in order to know where they are going. They might even eat sugar cookies while they plot.

Other writers need just a hazy view of what’s coming up ahead, if that. At the most, they might have some plot points lurking in the back of their mind. For these writers, the magic and story come as they write. If they try to write an outline, they stumble into writer’s block and the fun is gone. Maybe they would rather eat fruit cake sugar cookies while they write.

Oh, yeah. Back to sugar cookies. Either way, a writer will hopefully at some point be under a deadline, whether it’s the revisions, the copyedits, or the sequel.

My son had a secret santa party last week. He had to bring in a homemade gift. I thought I had until Wednesday, but on Monday, I found out it was due on Tuesday.

He had made nothing. Or I should say, I hadn’t planned out a cute gift that he could make from cheap craft supplies that wouldn’t fall apart before the child made it home. (Teachers, I would much rather buy a 3-5 dollar gift.)

So after my failed biscotti venture, I needed a boost in my cooking confidence. I needed a homemade gift for my son. I needed to bake sugar cookies and decorate them with my children. Because all good moms make Christmas Cookies. Right?

How did it all turn out? The decorated Christmas trees, bells, and stars were a smash hit.

Look away if you are a super mom and make twenty different colors of frosting for your cookies.

(And I don’t think it mattered that I used Betty Crocker’s vanilla frosting on all the cookies – even the trees.)

(Sounds best when singing along to the actual Josh Groban song, trust me!)

Baby is napping,  fingers madly typing, words are spilling, like tears from a baby. (not mine of course.)

I’ve been dreaming, but not since second grade. (many writers knew their career path at the tender age of 7. I was still worrying about how not to eat the canned peas placed on my plate at dinner time.)

But word by word, I’ve, Had my craft to learn. (Supposedly it takes a million words before you stop writing crap, so I’ve heard.)

When it seems the muse has slipped away, I find it all again on my first page. (Not typically on a first draft-first page though, more so on a revised version.)

Believe in what your heart is saying, Hear the words inside you beating. There’s no easy way. There’s so much you want to say.

Believe in what Strunk and White says inside, And give your plot the words to fly. You have all the Maas books to read,  (I believe there’s a new one each year.) If you just believe.

Laundry is calling, Cheesecake is burning. (Okay, I’m lying. Cheesecake is way too complicated. Especially when I have visions of boxed brownies dancing in my head.) Presents needs wrapping. (Do I wrap the stocking gifts or not? Hmm.) Like my rugs needs vacuuming. (Especially since my vacuum cleaner spits out more dust than it picks up.)

My kids have been dreaming, (of getting a DSI – yeah, right. Maybe next year.)  Since they got off the bus. For snacks and drinks since, they claim they are starving. (Okay, they might be a little hungry.)

When it seems that life gets in the way, Remember that your family takes first place.

Believe in what your words are saying, Trust in your plot layering. (Not the same thing as a 3 layer cake, which by the way, I’ve never been able to manage. All I can do is a lopsided 2 layer cake.)

Believe in what agents’ blogs say inside, And don’t send gifts or chooocolate. (Even brownies from a box.)

Believe in what your book says inside. And let your query fly.  (Okay, I’m getting tired. Just repeat this line several more times, taking out words each time, until you are down to — just fly.

The smell of pine. The soft glow of lights on the tree. A kitchen, still and quiet, waiting for the kids to wake. (which I’m sure will be soon and then watch out)

Half-eaten cookies on a plate. A glass half empty. (must be half-full because it’s Christmas morn) Crisply wrapped presents. (except for mine because I use too much paper and the paper is all crinkly at the corners)

Streaks of a winter dawn in the window. (smeared by my kids’ breaths and fingerprints) A mug of hot coffee warms my hands. Steam rises in the air in curly q wisps. A thankful thought and prayer for our Savior’s birth. (even though he was born in spring)

Christmas morn-oh, what a joy.

Have a wonderful Christmas! Enjoy the holidays!

Characters to die for…

I went undercover. My name was “Barbie Doll”. 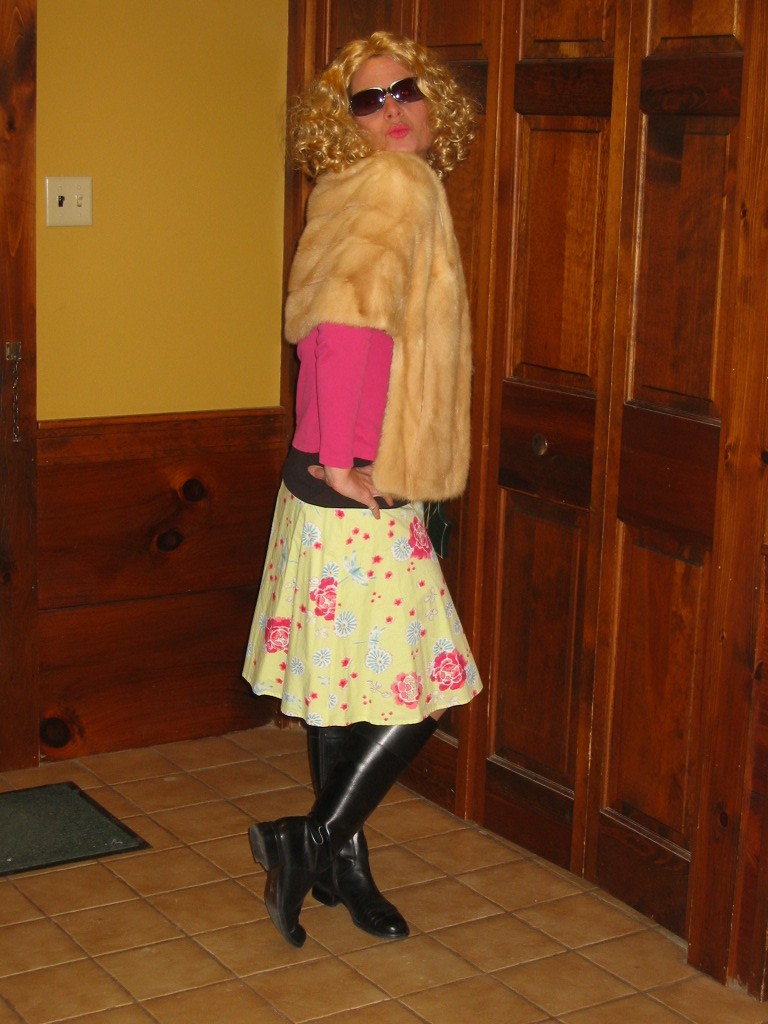 Thankfully, I wasn’t alone. My partner in crime was “T.Redd”. 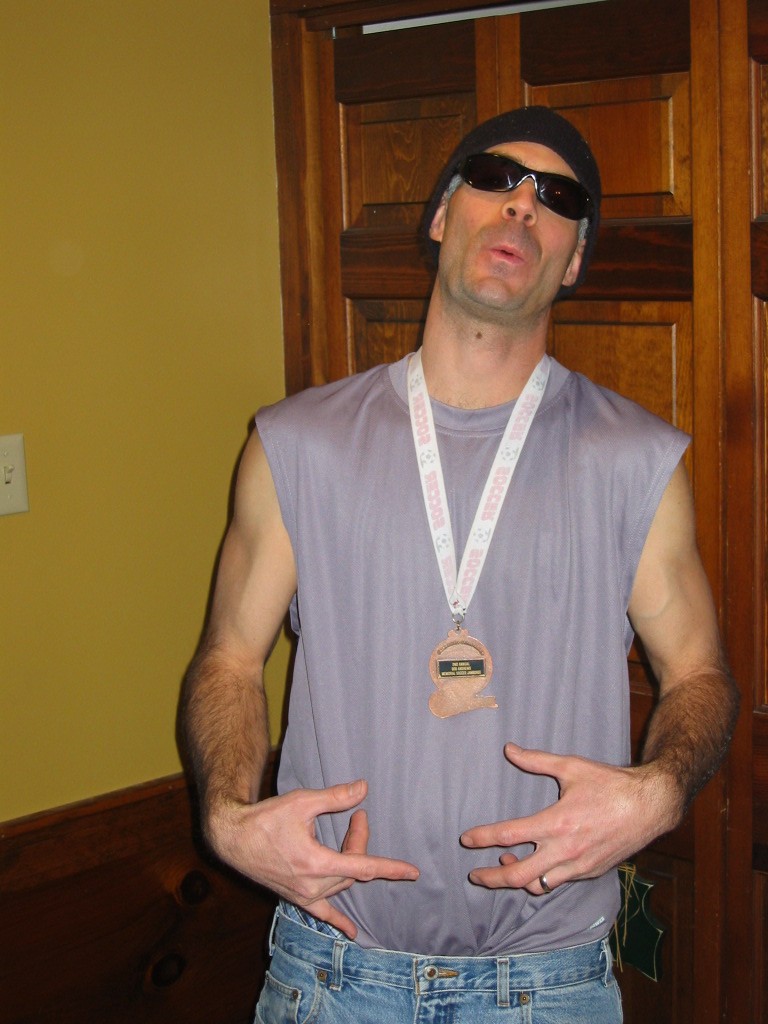 (The rapper medallion around his neck is really my son’s

soccer jamboree medal. You’ve got to realize the nearest

I took on the persona of a ditzy  blonde popstar/

I followed leads. But the night of mystery left me

befuddled. I was a minor character without a big role

to play. A smoke screen. A red herring. A disappointment.

So, the morning after (with the perp caught and

arrested) I sipped my coffee while comparing a story’s characters

to the character I played. Even if a character or

subplot is a redherring or a humorous sidekick, we still

want that character to have a purpose.

So, if you pulled a character, combined two characters,

I say it should. If not? Why have it in your story? Can you give

that character or subplot more meaning? More of a

connection to the main plot? Try it. You might be surprised.

How did my night as a ditzy blonde/undercover sleuth

I had fun with friends. I celebrated a close friend’s

milestone 30th birthday. And once I realized I didn’t

play a big part, I flirted with my rapper bad guy husband.

(And, hey, I even convinced a couple people that I was

Are your characters pulling their weight? Are they to die for?

Cranberry Biscotti. I don’t even know what it is.

It sounds very holiday-ish though. If I made something

get dinner going because we’re going to a Murder Mystery

Birthday party (close to Christmas but not a holiday

party). And I have to bring an appetizer(I’ve always had

a hard time spelling horsdeuvres). I thought if I brought

Cranberry Biscotti instead of my normal crackers and cheese

or veggie dip that would be pretty darn cool.

I can kinda say it would have been homemade

because someone else gave me the dry ingredients

present with the directions attached on how to finish and then

so kindly handed it down to me).

It should have been easy.

1. Cream butter and eggs. (I think I can blame everything on

this step. Three outlets in my kitchen aren’t working and

my microwave is hooked up to one of them, so I couldn’t

properly soften the butter. I used a blow dryer but that

only made the outside melt. I creamed them but

it turned out to be chunks of butter with beaten eggs.)

(I even chilled the dough but there was no way the

powdery mix was shaping up into anything. And there

was no way it would have formed two loaves.)

sounds easy. I never made it this far.)

Revised 3. Dump whole thing in the trash because

the microwave not working.