A look behind SEEING CINDERELLA! (I love these kinds of stories.)

I was fortunate to read this arc last summer and as soon I knew there was some spying going on with some magical glasses – I wanted to read it. And it lived up to it. Gush over the cover. Read the cute summary but then pay attention to Jenny’s story behind the story. 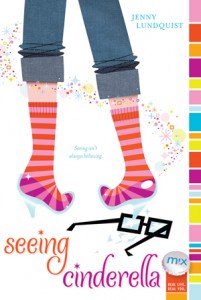 Seeing Cinderella: Calliope Meadow Anderson is terrified to start seventh grade. Not that the summer has been so great— her overachieving best friend, Ellen, is slipping away, her parents’ marriage is falling apart, and to top it all off, she has to get glasses the day before school starts. Life isn’t going too smoothly.

But things get unexpectedly weird when Callie meets her wacky optometrist and receives a pair of glasses so ugly they make braces and headgear look cute. But pretty soon, Callie makes a freaky discovery. Her glasses have magic powers: they can read people’s thoughts (and she’s pretty sure they repel boys, too).

Why I Write Upper Middle Grade

(Or, A Love Song For The Least)

I knew all this, but there was never a doubt in my mind that—if I was lucky enough to publish a book—it would be geared toward the upper end of middle grade. Girls who might feel stories about dogs and dragons, or ponies and prophecies were soooooo immature, but who weren’t ready for the more intense subject matter sometimes found in YA.

I wanted to write for those girls, because that’s who I was.

As a child, I struggled to read. It wasn’t until fourth grade that words seemed to click and I was moved out of the “slower” reading group. (How I hate those leveled groups!) During that one glorious year I discovered authors like Louisa May Alcott and Roald Dahl. It was fantastic. It was also short-lived.

Because then fifth grade started. While I was happy to stay a kid, my friends, unfortunately, were not. Conversations about boys, and kissing, and parties, and a host of other topics I wasn’t ready for replaced their desire to play handball or foursquare. And after a while, reading younger middle grade books seemed so childish compared to the subjects and scenarios my friends were discussing at school. I felt like a misfit, and I sought solace in books.

I didn’t want to read books about girls slaying dragons; I wanted to read books about girls facing down the dangers of the popular clique, about the misfits and the late bloomers who felt just as awkward and lonely as I did. To me, these girls weren’t just characters on a printed page. They were my standard-bearers. They represented hope, and through their trials and triumphs taught me it was possible to survive these years and move forward.

Seeing Cinderella is what I like to call Magical Realism Lite. It’s set firmly in our world, with a magical twist: Callie, my main character, receives a pair of magic glasses. But Callie doesn’t use these glasses to “see” into a realm of faeries that are about to take over the town. Nor does she use them to read an ancient prophecy promising that she is the key to preventing an impending global disaster. Nope. Her glasses allow her to read other people’s thoughts and she does, in my humble opinion, what any middle schooler in their right mind would do: she uses them to spy on the thoughts of her mom, her BFF, her long-time crush, and pretty much everyone else in her middle school to find out what they really think of her. She may not fight off a dragon, but she does use her glasses to battle a best-friend stealer. (And along the way she discovers Super Freaky Glasses Rule #9: It’s easier to dislike someone when you don’t have to read their thoughts.)

I had objections early on to writing this book. A writing instructor cautioned me about taking on the project because she said that shy, passive characters can be extremely difficult to write. As it turned out, she was right, but after she read a draft she told me she’d gotten over her reservations because she loved Callie’s voice. Either way though, I wanted to write a middle school story from the perspective of the girl who feels like she’s “not seen.” A girl like Callie whose biggest goal in life is just to survive middle school: by being as unnoticeable as possible.

Please don’t misunderstand me. I am a HUGE fan of YA and younger middle grade literature. And as a writer, I have some projects in those genres I’d really like to publish one day, some of which may actually feature spirited female characters slaying dragons and reading ancient prophecies. But for my first (and second) book, I wanted to write upper middle grade.

When I was in middle school I was considered the least popular, the least pretty, the least outgoing of my friends, and it was through the books I read as a tween that I realized things would one day be okay. That the way my friends saw me (or at least, the way I thought they saw me), and the way I saw myself at that time in my life, wasn’t going to define the person I would eventually become.

I guess what it comes down to, is this: I wanted to write a story for any girl who feels (or has ever felt) like she’s “the least.” In a very real way, Seeing Cinderella is my love song for those girls.

What about you? Did you ever feel like “the least” in middle school? What books did you read during those years that stood out to you?

Thanks so much Jenny for letting me be a part of your blog tour!

← The human heart, its many mysteries, and gerbils.
The highs and the lows of self publishing. Worth it? →

16 Responses to A look behind SEEING CINDERELLA! (I love these kinds of stories.)