Warning: scandir() [function.scandir]: (errno 2): No such file or directory in /home/content/82/6039282/html/_sites/laurapauling_com/wp-content/plugins/better-wp-security/core/modules/backup/class-itsec-backup.php on line 273
 Will contemporary YA make a comeback? (Meet Callie Kingston.) | Laura Pauling

Will contemporary YA make a comeback? (Meet Callie Kingston.)

Please welcome author Callie Kingston to the blog to talk about her new YA release, Undertow – a contemporary novel in which a young woman finds a terrible choice thrust upon her: overcome the pain in her past and the dangers which lurk in her mind, or succumb to these and be lost forever inside a beautiful dream.

Laura, thank you so much for inviting me to join your blog and do a guest post as part of the Undertow blog tour. As you know, my new novel touches on some pretty serious themes, including mental illness, child abuse, and alcoholism. It also happens to include a merman, albeit one that is possibly a figment of Marissa’s imagination. There’s an intentional juxtaposition of the paranormal with a gritty realism in Undertow. Lots of readers have asked where my idea for such an unusual plot was generated. And do I worry, that among shelves filled with paranormal romances, Marissa’s story would be lost?

It’s a legitimate concern. When I walked into Borders shortly before it closed, I cruised over to the Young Adult section. Judging from the shelves, ninety percent of novels for young people involve vampires. Or fairies. Or are set in a post-apocalyptic world circa 1984. Now, all of that is great. Many of the books are fabulous reads. But is that all there is?

I’ve blogged about this before. It seems that as the economy tanked, and publishers and bookstores came under increasing pressure from e-books, they started chasing last years’ success stories. Twilight and Hunger Games were blockbusters, and if they could replicate those, maybe they’d keep their business afloat a while longer. Unfortunately, diversity in the genre fell by the wayside as a result, with contemporary novels suffering the greatest casualties.

Many write that contemporary YA is a tough sell, that young girls just want to escape reality, not read about it. And Marissa, the protagonist in Undertow would be among that group. With Undertow, I’d set out to answer the question: What if the luscious mythical creature that was the object of her desire might not actually exist?

And last summer, something happened that made me believe that readers may well be ready to share Marissa’s journey. I blogged about the event: “. . . #YAsaves burned up the web with folks tweeting about all the ways that realistic young adult literature helps teens feel heard and not alone. This was in response to an . . . op-ed piece disguised at journalism in the Wall Street Journal. The journalist went on an all-out rant about how gritty and evil YA is today, and recommended some throw back reads instead. Lots of teens jumped in with heartbreaking stories, authors weighed in with their own tales . . .”

Later, one blogger posted a survey she’d conducted with her class of sixteen year olds, asking them what they wanted to read. Here’s the list:

So there’s definitely a market for contemporary YA with plots which feature serious issues. And fortunately, there are plenty of authors, including myself, writing stories to meet that desire. I hope that readers will enjoy accompanying Marissa on her journey and love hearing from them about how her experiences resonate with them.

Thanks Callie for stopping by!

Purchase on Amazon (Undertow is part of KDP Direct so can be downloaded free if you’re a prime member.) 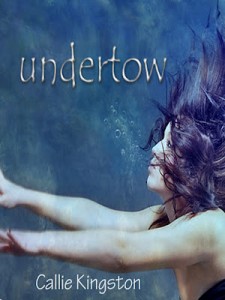 So what do you think everyone – will contemporary YA make a comeback? I keep hearing it will but….wondering when that will happen.

← The mystery of a fantastic book.
Friday 5 – Changing with the times, blogging, and chocolate chip cookies. →

46 Responses to Will contemporary YA make a comeback? (Meet Callie Kingston.)