Welcome author Jennifer Carson and her soon-to-be-released middle grade novel! She’s a friend, crit partner, and an incredibly gifted artist and writer. You name it, she can do it. Read on to find out about HAPENNY MAGICK and Jennifer’s decision to fund her project with Kickstarter. 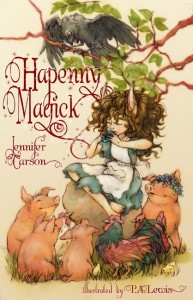 As the tiniest Hapenny, a race of little people, Maewyn Bridgepost spends her days from breakfast to midnight nibble scrubbing the hearth, slopping the pigs, and cooking for her guardian, Gelbane, who never spares a kind word. As if life as a servant isn’t bad enough, Mae learns that Gelbane is a troll—and Hapennies are a troll delicacy.

Years ago, a spell trapped Gelbane in Mae’s village. Ever since, Gelbane has been chiseling away the magic spells that guard the village and now Mae’s community is destined to become a smorgasbord for half-starved trolls. 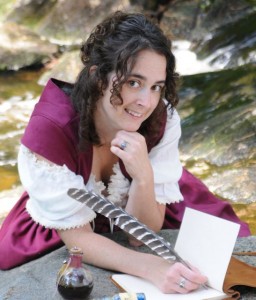 Tell us a little history behind the story.

Hapenny Magick began its literary life as a picture book manuscript, which is kind of funny, because so did To Find A Wonder! I wonder when I’m going to learn that I’m long winded? Anyway, I had asked a writing friend, who is a picture book author, to look it over. I kept thinking that something was missing–it just wasn’t right. And she said, “It sounds like the synopsis of a longer story.” The lightbulb went on and three years later, here’s Hapenny Magick. Thanks, Deb!

How did your love for the Renaissance and Middle Ages develop?

I’ve been enamored with these time periods since I was thirteen. That fall was the first time my parents took my to the Ren Fair in Michigan where I grew up. It became a tradition after that to go on my birthday. I love the richness of the language and the fact that, before REAL scientific methods were introduced, anything was possible.

Why the decision to publish through a small start-up small press?

I tried for a couple of years to find a traditional publisher that would pick up HAPENNY MAGICK and run with it, but deep down I knew this book wasn’t meant for mainstream media. There were no farting dogs, butt cracks or vampires. The story unfolds like a classic fairy tale and the market for these kinds of books right now are seen by the mass media as too slow to gamble on. Mass media outlets are great, don’t get me wrong, but they tend to not take risks and to produce the same kind of media message over and over again–the “payday” message if you will. That’s why we have not just one CSI but three. HAPENNY MAGICK isn’t a trendy book. It is a classic story that I’m hoping will become one of your favorites.

I went through a small press with TO FIND A WONDER and I could have gone back to that same press and published HAPENNY MAGICK, but I decided to give it a shot myself. I had the art connections and a husband that was supportive of the idea. I just needed the money to get the project through its final stages, and that’s where Kickstarter.com came in.

What exactly is Kickstarter? I’m curious.

Kickstarter is a site where people can support the arts and invention through donations that earn them rewards from the creators of the projects themselves. And the great thing is, when you pledge your support, if the project doesn’t meet its funding goal, you don’t pay. So you aren’t donating to something that may not come to fruition.

You can check out my Kickstarter site here:

Thanks, Laura, for having me on your blog and for helping me spread the word! I’ve got 6 days to go to meet my goal!

Laura again. I’ve read this story from the first draft to the final. It’s a whimsical fun story filled with danger and magic. The illustrations through out the story are incredible. I’m buying one for niece. And for myself, of course.

And did you know that your donation will buy you copy? Pretty cool. Her first middle grade book, TO FIND A WONDER, is for sale on Amazon. The Kindle version is only 2.99! Check it out.

Please check out Kris Asselin’s blog for more information on Pugalicious Press. They are accepting submissions!

Here’s an illustration in progress from HAPENNY MAGICK.

And here’s the cover with Jennifer’s hand crafted doll of Maewyn, the hapenny. 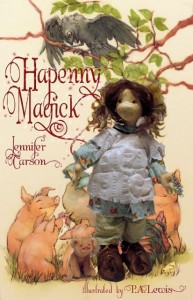 Thanks Jennifer for sharing your work. I hope you get this book fully funded because kids are going to love it!

← How to keep a literary novel afloat in the middle.
STRING BRIDGE and my ultimate confession. →

16 Responses to HAPENNY MAGICK-What if trolls were to invade your village?